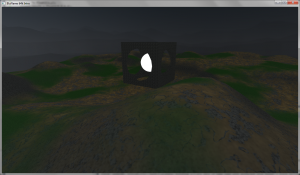 The terrain and the hollow cube are triangle meshes, and the white sphere is raytraced. I want to explain how I set up the rendering pipeline. END_OF_DOCUMENT_TOKEN_TO_BE_REPLACED

I admit, it’s fancy and inspires some competition amongst the IT/development crew. But it doesn’t always work right. The Windows Experience Index (WEI) score for disk performance shouldn’t be taken too seriously, after my recent experience:

My current PC configuration includes two 40GB Intel X-25V SSD drives, one for the system and one for the programs. It’s not the highlight of the SSD world, but way faster than the usual hard disk drives.

So, happy as I was with the performance, I updated my WEI score and stared at the result: 5.9…
END_OF_DOCUMENT_TOKEN_TO_BE_REPLACED

It turns out, that the only way, that I could easily get a serialized string out of the RichTextBox, was to use the RichTextBox.Xaml property. END_OF_DOCUMENT_TOKEN_TO_BE_REPLACED

Since I’ve already had many moments where I wanted to share some of my findings with the rest of the world, I finally decided to create a decent blog. I hope you find my contributions useful. Feel free to leave comments.